To share your memory on the wall of Jeanne LOGAN, sign in using one of the following options:

When Ben was drafted into the Navy she went to work at Gallagher’s Drug store and then at DESC and later met up with Ben in New York when he was released from the Navy. The two of them moved back to Dayton and for many years stayed with the (Tabernacle) Copeland family. Ben worked at Suchers Meat Packing Company and while working there he invested in Peanut machine parts as he assembled 125 peanut machines and placed them in locations all around the Miami Valley. From the 80% profits of his Peanut machines he invested in his first of thirteen businesses. Jeanne worked faithfully along side her husband as they invested in one business after another

After Ben passed in 1979 and she and Jesse continued to work in the business until she retired and sold the last few business in 1990 at the age of seventy (70). She tried to keep busy by line dancing with Senior Citizens, traveling to her cabin in Idlewild, Michigan for a two month stay and traveling to Florida with her good friend Minnie Robinson (mother-in-law) of Ben. She could not keep still so six years later she went to work at Trotwood schools working in the cafeteria and serving food as a part time worker. She worked at Trotwood schools for the next 10 years and retired at the age of eighty-six (86). Shortly, after that her mental health started to fail and she went to live with her son Jesse and daughter-in-law Ann until her death.

To send flowers to the family or plant a tree in memory of Jeanne E. LOGAN (Ross), please visit our Heartfelt Sympathies Store.

Receive notifications about information and event scheduling for Jeanne

We encourage you to share your most beloved memories of Jeanne here, so that the family and other loved ones can always see it. You can upload cherished photographs, or share your favorite stories, and can even comment on those shared by others.

Dr. Michelle Pierce Mobley and Earlene Pierce, Federico Rosendo, and other have sent flowers to the family of Jeanne E. LOGAN (Ross).
Show you care by sending flowers

Posted Jul 03, 2020 at 05:13am
Ann and Jesse, our thoughts are with you during your time of grief. Know that you are in our hearts today and always.

Posted Jun 30, 2020 at 02:44pm
In memory of my sister, Jean Logan. Your sweet spirit will forever be missed! Rico & Miriam Rosendo and their children.

Posted Jun 29, 2020 at 09:19am
Mom you were always bright and beautiful, a ray of light even in the darkest times. Our memories of you will never be forgotten. Love you Much .

Posted Jun 27, 2020 at 08:27pm
Wishing you peace to bring comfort, courage to face the days ahead and loving memories to forever hold in your hearts.

Posted Jun 27, 2020 at 04:13pm
Jesse and family, I just wanted to send my condolences to all of the family in the passing of your mother. May you find comfort in knowing that she is at peace and soaring with the angels. It was such a pleasure in talking to you and plan to keep in touch. Sincerely, Jeanne Clemens Mazell Atlanta, Ga
Comment Share
Share via:

Thank you Jeanne - so nice to speak to you today!! Please stay in touch.
J

To the family of Jeanne Logan Our Love & Prayers go out to the Logan family in the loss of your loved one.We know that she is in God's hands;; Ralph & Kathy Johnson Indianapolis, IN 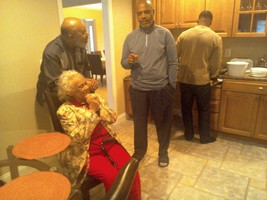