To share your memory on the wall of Martha CLARKE, sign in using one of the following options:

To send flowers to the family or plant a tree in memory of Martha CLARKE, please visit our Heartfelt Sympathies Store.

Receive notifications about information and event scheduling for Martha

We encourage you to share your most beloved memories of Martha here, so that the family and other loved ones can always see it. You can upload cherished photographs, or share your favorite stories, and can even comment on those shared by others.

Posted Jun 19, 2020 at 11:33pm
You have my deepest condolences.  My heart is heavy as I have learned of Mrs. Nealy'-Clarke's passing.  She was my English teacher at Fairview and she by far is my favorite. She always was and will always be my favorite teacher.  I'm really saddened that I didn't get a chance to tell her how she changed my life.  She encouraged me and inspired me to write.  I never wrote anything before her class; she challenged me to write and to enter a writing contest in which I won second place.  It was about a martian that was actually disguised as a tomato in a garden.  You see, I was a shy child....timid, but she helped me learn and feel confident in expressing myself.  She gave me the permission and confidence to tap into my creative side.  I loved her for that!  I remember when she used to play her records in class and had us (her students) pick out nouns, verbs, adverbs, pronouns, etc.  Her teaching was unique, memorable and effective.  I love her for believing in me when I didn't believe in myself.  She saw something in me before I did.
I love you Mrs. Nealy-Clarke.  Rest on.

Posted Jun 18, 2020 at 05:48pm
I was fortunate to work with Martha in the DPS system. We taught together at several schools. She was one of the most gifted teachers I have ever
Known. She was a wonderful woman and I am blessed to have known her. My husband was on parish councils with her and he shares my feeling of joy to have known her. She was amazing. We are so sorry for your loss.

Posted Jun 18, 2020 at 11:43am
I had the privilege of working with Martha at Fairview Elem. School in the 1970's. A dedicated teacher who had high standards for her students. A brilliant woman who challenged her students to achieve more and value education. Martha was "tough as nails" on the outside, but had so much love and compassion for the students - and they knew it! The birth of her son brought great joy to her life - and we adored him! Knowing Martha enriched my life and I carry great memories in my heart of time spent with her.
Comment Share
Share via:
L

Posted Jun 13, 2020 at 09:42am
Darren and family, our heartfelt prayers go out to you on the passing of your mother, Martha. What a beautiful spirit she had. I remember most fondly working on Vacation Bible School with her at Assumption Church. As a lector, she was able to convey the message of the scripture with clear understanding. We all loved it when she was the lector. Beautiful in her demeanor as well as her style, she will always be remembered. May God Bless You and Heaven Smile on you and the family and give you Peace.
Sincerely, Marco and Leona Marmolejo
Comment Share
Share via:
CC

Posted Jun 09, 2020 at 08:57am
I am heartbroken to hear of Martha's passing, but know she is now relieved of pain and suffering. Martha was a beautiful spirit who touched many lives as an outstanding educator. She truely lived a life of giving of herself. Work hard but play hard and enjoy the gift of life was Martha. On the lighter side, I wish had been more successful at getting her use technology.
I count our friendship as a blessing.
Comment Share
Share via: 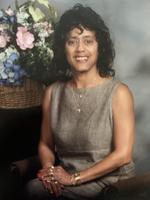