To share your memory on the wall of Jerome NORTH, sign in using one of the following options:

He was an Army man and a real life hero as he always strived to help. He ALWAYS had a ready smile and joke to make you laugh. He would help anyone who needed it (many times at his own detriment) and never balked at lending a hand. He was a MAJOR Black history buff who did not just accept what was written in the history books of white America but really dug into the facts (through research and speaking with people in rural areas with first hand knowledge and made sure to impart his wisdom and facts onto his children. You could guarantee almost every conversation would include a piece on the injustice of blacks and just how long we have been oppressed. We spoke a bit about the state of the world today right before he passed and he said he hoped we didn't lose momentum, that change was in there air but he wasn't believing it would stick until he saw it. Maybe in heaven he can continue the fight of this systematic racism just has he did on earth. His sports were basketball and football, even though he was often the smallest on the court/field, he never let that stop him! theHe loved to ride his motorcycle and us kids would ride right along with him. He dreamed of going to Jamaica and Africa one day. Hopefully, “us” children can still take him before we leave this earth. Going to meet those of the Ebu tribe and really see if these are "his" people. Many a time he came across Africans who'd ask if he was from the Ebu tribe so that was definitely on his list of places to go. He was truly a prime example to live by.

He will be missed, he will be celebrated, most of all, he will live on. We love you Dad!

To send flowers to the family or plant a tree in memory of Jerome Henry NORTH Sr., please visit our Heartfelt Sympathies Store.

Receive notifications about information and event scheduling for Jerome

We encourage you to share your most beloved memories of Jerome here, so that the family and other loved ones can always see it. You can upload cherished photographs, or share your favorite stories, and can even comment on those shared by others. 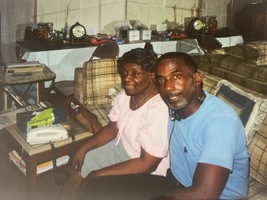