To share your memory on the wall of James GREEN, sign in using one of the following options:

James was a well-known dominoes player and was affectionately called Goldie. As an avid sports enthusiast, James especially loved Chicago Bears and Bulls. He was an unapologetic Chicagoan fan and would share his disdain for frontrunner fans with anyone who inquired. In sports, and in his life, he remained steadfast and loyally committed to the people he believed in, through the good and the bad with his loving friend Carolyn Dover.

James was employed many places throughout his life with the last 15-years as a faithful employee at the Clark County Fairgrounds.

To send flowers to the family or plant a tree in memory of James D GREEN Jr., please visit our Heartfelt Sympathies Store.

Receive notifications about information and event scheduling for James

We encourage you to share your most beloved memories of James here, so that the family and other loved ones can always see it. You can upload cherished photographs, or share your favorite stories, and can even comment on those shared by others. 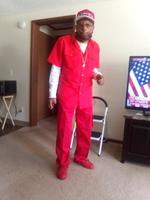